Writing a book: Process and progress

I’m not quite sure where the idea for this book started. I have a feeling I was chatting generally about what I might write and said something like “I’ve done a lot of design thinking workshops this year – I could probably do something on that”.

The idea took hold. I thought there was likely to be value to people in learning how to facilitate workshops. And I’d certainly facilitated enough. The thing I wasn’t sure about was – did I actually have any substance to write? I’m entirely a self-taught facilitator. I’ve been standing at the front of groups just about forever, either in a workshop teaching setting, or a design workshop setting. I know a ton of workshop methods. And my workshops seem to go well – I sometimes have a fail, but can usually figure out what went wrong.

So I knew I’d have two challenges writing this book:

1. Unpicking what I did without thinking, to write about it and teach it

2. Making sure I was actually ‘right’ – that what I do is good and worthwhile teaching to others.

This sounded OK. I didn’t do anything with this other than have it for me and read it occasionally.

I started telling people the idea when they asked what I was going to write and *everyone* was enthusiastic.

Next step was to knock out an outline. What would the key points be. Note, this isn’t headings, this is key points, then loosely structured.

Because I wasn’t confident that I was ‘doing it right’ I thought I should do some research. So I bought a bunch of facilitation books and read them. As I went, I added extra points to my outline.

This was good. There are some pretty decent facilitation books around. There isn’t one that covers what I’m covering. And, turns out…I think my experience is probably better than some of the already published books.

So that was good too.

That was all pretty easy, but eventually I finished the easy research-y part and had to do the next step. I actually had to write.

Then I had a call with the publisher, and decided I had better put some words in a line.

I was wondering what kind of tone I would take with this book. Would it be chatty, a bit formal, would I tell stories or just give principles.

You know, the only way to figure this out is to start. So I started.

I start my day with a block of time for writing. Straight after breakfast and before I open any social media on my computer. 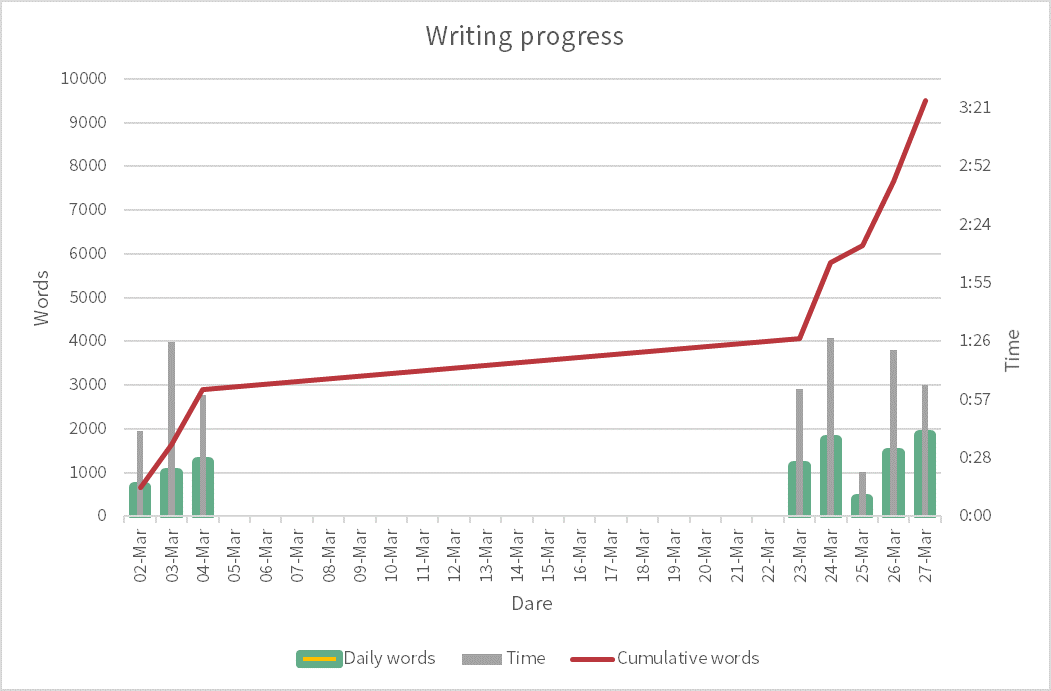 I honestly started by putting my fingers on the keyboard and writing.

Then I had a couple of week gap while I worked with a client (Yay! Work! Money!). After this I had to change my routine as I had a 7:45am standup with a remote team, and wasn’t going to get up so early that I could write before my client day.

That’s actually the bulk of the first cut of words written. There are a couple of things on my to-read list that I’ll do over the weekend, and next week will be the second writing and making this thing actually good.

I use the pomodoro technique for any kind of focused work (25 minutes work, 5 minutes break where I get out of my chair, no exceptions, no running tasks into each other). I write easily for about 18 minutes (that’s about when I’ll check I have the timer running), feel clumsy for about three minutes, edit for a couple of minutes. Without fail. I have never been mid-sentence when the timer finished. I know that if I attempted to write in longer blocks, it would just be bad work.

I can manage about 1.5 hours in a block. After that, I feel like I’ve run out of words. I can switch to book-related administrative tasks, but I can’t continue writing. I can attempt another block after lunch (as long as I’ve eaten and taken a good, long lunch break).

I took a few weeks off to edit the other book I’m writing, and returned for the really hard work in this book – wrangling it into shape. It took me a week, with a couple of hours a day. I moved things around in the structure, rewrote a lot because the structure was different, moved things more, rewrote some more. At the end of it, the book looked like a book, not a pile of rough thoughts. It felt mostly like someone would be able to read from front to back and not feel like it was out of order.

The other thing that happened here was that I realised I had quite a lot of content about planning workshops, which was needed for context and also because the facilitation part doesn’t stand alone (not in a book at least). So the rough title might need to change. But I’ll figure that out later.

I sent the book out to some folks to get their feedback. Feedback is always interesting. The main things I learned were:

In that period, I also wrote a talk, which helped me think about structure some more. With feedback in the document, I moved a bunch of stuff around in an outline and it looks better.

I had told someone that the thing that always happened when I wrote was that I always started off writing procedurally and sequentially, and when editing, it always re-arranges itself to be structured around principles and topics. I can see that happening with this restructure – it is starting to look a lot better when it’s less procedural, and ideas hang together better (the problem with procedural is where to talk about something – do you talk about it in the ‘planning a workshop’ section and risk blowing that out, or do you talk about it in ‘running a workshop’ and have people miss important ideas when planning).